Do not pray for easy lives. Pray to be stronger men.
John F. Kennedy

My family made several trips to Dallas to visit relatives when I was a child.  It was during one of those trips the following picture of me was taken at the Kennedy Memorial in Dealey Plaza.
I was able to enlarge the picture enough to make out some of the words.  The plaque explains what happened on November 22nd, 1963 as the motorcade passed Dealey Plaza. 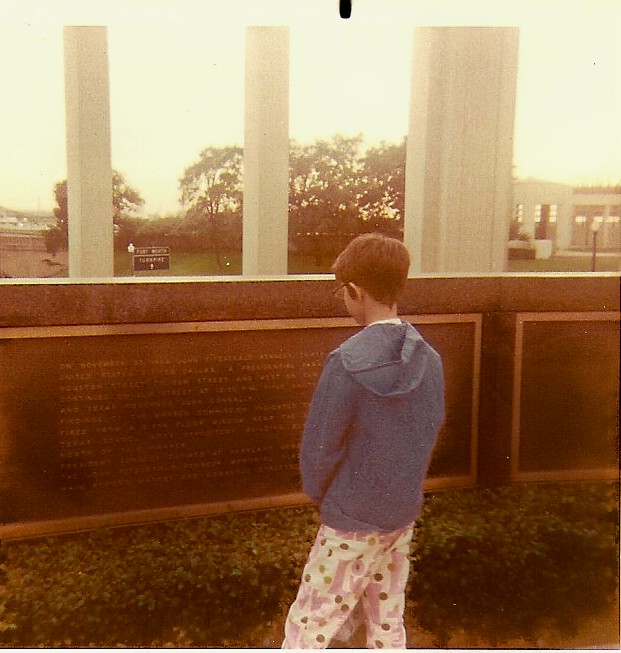 I leave you with President Kennedy’s most famous quote, including the second sentence which people usually leave out.

(P.S. The word “Love” is written on my slacks
The center of the “O” in love was orange.)

Thank You For Scattering Joy

Why JoyReturns Exists: "...That henceforth I may be the salt of the earth and a blessing to all." (Regeneration prayer from The Valley Of Vision, A Collection of Puritan Prayers )

Pray for 40 Days before the election using Mark Batterson's book Draw the Circle as a guideSeptember 24th, 2020
47 days to go.

The 5000 Year Leap, A Miracle That Changed the World; Principles of Freedom 101

© Michele Kearns and JoyReturns.com, 2012-2020. Unauthorized use and/or duplication of this material without express and written permission from this blog’s author and/or owner is strictly prohibited. Excerpts and links may be used, provided that full and clear credit is given to Michele Kearns and JoyReturns.com with appropriate and specific direction to the original content.